I didn't want a cat. What I wanted, if anything, was a kitten. No therapy like kitty therapy, I said. They are constant laughs. In reality, however, what I wanted was Hobo and that wasn't going to happen. His spirit lingered, but his chin nips and lifeforce were long gone. I was left with eleven years of travel memories with him and Teak, my Lab. The next feline would not be an orange tabby cat ... Hobo would be an impossible act to follow. Furthermore, if a feline was going to come through my door it would be with his blessing.

A Bengal, perhaps? A dozen years later, I still missed Pooka, my little leopard cat. I was shocked to discover that prices for Bengals were over $2000. That wasn't going to happen. A calico? I'd always loved their chaotic, stunning markings, but they were rare. The XX chromosome wasn't common.   99.9% of calicos were females and I was ready for that, having gone through Hobo's urinary tract problems, common in males. I began to check out rescue centers within 100 miles. No calicos. That's okay, I figured. A kitten will come along when it's right.

Winter solstice behind me, the new year closed in. Cold winter temps held off and Southern Arizona was blessed with warm days and calm, cool nights. Several faraway friends texted to say they would pass through around new years. I decided to have a new year's eve fire. Friends arrived and filled my rv spots, my daughter Hope arrived from Tucson with Norma, a friend and fellow teacher. It was Norma's first visit to the land.

It was a fun evening with a small circle of friends. The fire blazed as we toasted the New Year on the hour, beginning at 6 o'clock. Around 8 p.m. I sat next to Norma, my first opportunity to talk one-on-one. I was fascinated to learn that in addition to teaching and raising her son Miguel, who I had met, she also fostered special needs cats for Pima County. I was uber impressed. She mentioned that she recently approached them to take on another. None had appeared but they did have a healthy new arrival and asked if she be interested. The cat was a tiny thing, not quite six pounds, surrendered for "changing family circumstances." (New boyfriend? Housing change?) Norma looked at me as the fire cast its warmth. She said the cat was a Calico.

A Calico! And she was adoptable. Norma had already fielded inquiries for the one-year-old. My mind spun. She wasn't a kitten but Norma said she acted like one. Norma showed me a photo and said the adoptee status wouldn't last long. Two days later I traveled to Norma's home in Tucson to meet calico.  She was beautiful and smart and affectionate. I hung out with her for an hour and told Norma I would take her. I drove to the Pima Co animal facility and adopted her. She was scheduled to be spayed in two days and I was scheduled to travel to NM. I would pick her up on my return, in a week.

Synchronicity. What were the chances of that conversation with Norma? That she would even turn up on my land for the first time? That the cat had just shown up and Norma took her even though she was not special needs, when she already cared for two cats? As if I needed more validation, I hit green lights between Norma's southwest home and the Tucson northside adoption office.

What I remember about that day was how the animal shelter parking lot was crammed full. The inside was packed with people. The limited staff were working their behinds off. I was impressed with the effort and care of everyone I met. When I asked what the fee would be I was told it was free adoption week. I filled out the form and the calico was removed from the available list. Thankfully, she had passed from her owner to Norma and skipped being held in a cage. 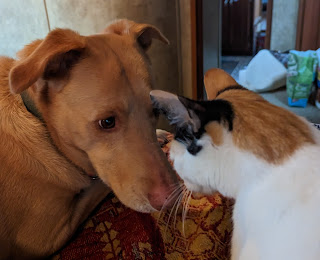 I'll never know the story of why she was surrendered. She was obviously loved and cared for. She was  quiet and calm on the 90 minute drive home. She exited the travel crate with ease and confidence. She and Dulce dog were comfortable at first sight, although yes, Dulce's curiosity contained a hefty dollop of jealousy.

She is a stunning lil cat, her black and gold markings smattered across her white body like an early map of islands, a jazz tune set to paper. I have named her Kalliope, for the ninth and eldest Greek Muse of eloquence, writing and epic poetry, depicted as a bold woman in flowing robes holding a writing tablet in one hand, a lyre in the other. Her name translates to "beautiful voice."  I love how speaking her name captures the feel of a playful, spotted excursion across her shorthaired pelt. 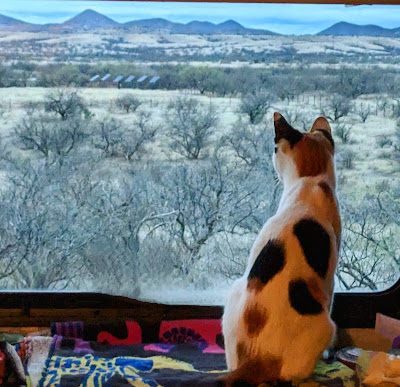 So here we are. I'm intrigued by her tiny nose and large ears, minute padded feet with claws I have yet to experience or the voice she uses sparingly. She has been a contented indoor cat all her life. I would not entertain a shift until she bonds with Dulce, who would protect her once outdoors, just as Hobo cued off his dog companions. I'm content to see how it unfolds, well aware of bird predation. Hobo, thankfully, preferred mice. 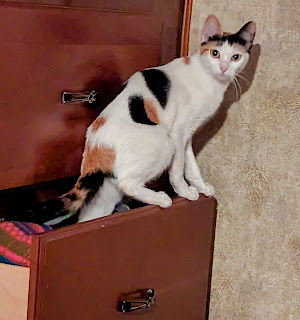 It is not quite a week since her silent journey home. Kalliope and I are getting to know one another. She is part ghost, part Meerkat. She leaps across the bed as tho she has wings. Her purr is hearty. She commands her environs. She loves to open cupboards and explore yet she has not touched the solstice tree with hanging decorations. She tosses and rolls the catnip toy and faithfully uses the cardboard claw scratcher. She barely sheds from her short, calico coat. She is a cuddler and a tunneler. A statuesque goddess cat, worthy of Cleopatra's smile.

I've yet to inform her of the inspirational responsibility that comes with her name, as her golden-green eyes pierce my soul. I have a keen sense that she already knows ... that she'll strike a perfect balance between a-mews-ing and a-muse. 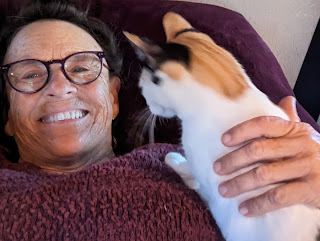 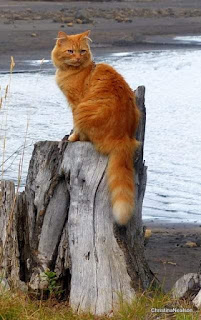 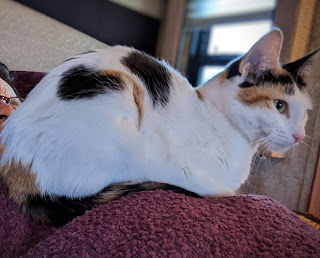 Posted by Christina Nealson at 4:41 PM