Energy shifts often arrive with an air of coyote...sneaky, outrageous and efficient, the tricksters also blindside their prey. 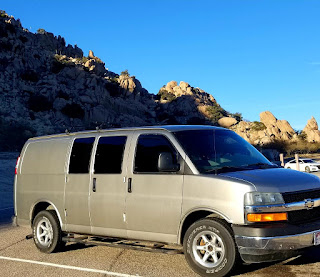 I met a fun-luvin' man in October, right before my birthday, at Faywood Hot Springs. I admit to asking the universe to fulfill a wish. Voila! We played well together: biked, soaked, explored and extended our reservations to fill a week. I'll call him Pinball for what I was soon to discover: his ability to propel himself from one place to another with projectile force. Three tasteful houses, three RV's, as many cars, more bikes, his retired life was a carefully constructed game plan of locations and toys to fit his recreational desires like biking and skiing. Early in our friendship he proclaimed I should have his van, which sat in his driveway in Santa Fe. He affectionately called her Ms. Day. (Score points for naming his vehicles.) Yes, there was a Doris in the van's lineage. Pinball explained she was a 2003 Chevy conversion van tricked out for camping.

I ignored the push. I was a big truck-4-WD-mamma. I associated vans with child molesters and rapists who drove up to the curb, grabbed a child or a woman and sped off. No thank you. But he kept saying it: Ms. Day should be with you. She's perfect for your life. He showed me photos. Hmm, beautiful platinum color; looked new and in excellent condition for an oldie with 106,000 miles. I knew the van would not be in my price range. He persisted. Comfy bed. Customized. Insulated. Swivel front seat.

Weeks later I broke down and asked How much; braced for the blow of impossibility. The price he quoted was a shock. Shockingly low. I could pull it off with selling ole Blue, my 4WD pickup with 204,000 miles.

My bones said do it. My intuition said do it. My brain said do it. I did it. I flew to NM in December and returned behind the wheel before New Years eve. She was such a smooth, easy ride --  complete with a homemade footrest that allowed for a bent leg -- that I drove straight through. It took time and concentration sort and move the possessions from truck and van. Friends helped shuttle me back and forth in order to put Blue on display with for sale signs. It only took a week to sell her. The heavens were smiling. Clutter cleared and the transition took hold. The floorplan allowed for space and easy loading for my ebike and kayak. There was lots of easily-accessible storage. The bed was surrounded by a great speaker system. I loved having large double doors on both sides! The vision coalesced: I would use the van to take short trips; easily stop for photographs and wildlife. She would take my travel passions to a new, seamless level. I named her VAN-essa. Vanessa, Greek for butterfly, the ultimate symbol of transformation.

Excitement took hold. I ordered van-ity plates for the first time. I was shocked to find that WOMAD was taken, but fun to know someone had read my books and the word I coined in Wild Road Home. I chose WOMAD 03, a number of deep spiritual significance.

VAN-essa and I recently departed for our first camping overnight, complete with a cool little hassock toilet I ordered online. One night was a good start on determining what I need to add for travel. (Cutting board, potholder, headlamp start the list) My rules of eighteen years on the road applied: take only those things that speak to the soul or fulfill a multi-functions. Yes, Hobo has a covered litter box hidden away.


I've gone from a van? not me! to wow, this rocks! I sense a cascade of unknown changes will follow. Jera, my house on wheels, is not pressured into shorter trips. Although I haven't done so yet, VAN-essa can pull 25-foot Jera. She has a larger engine than Blue.

I am forever grateful to Pinball,. He's not shy in reminding me that he knew it was right. Perhaps our synchronistic meeting was as simple as this.

VAN-essa, Dulce, Hobo and I. Watch out back roads, the Meander-thals are fired up!


Posted by Christina Nealson at 10:17 AM