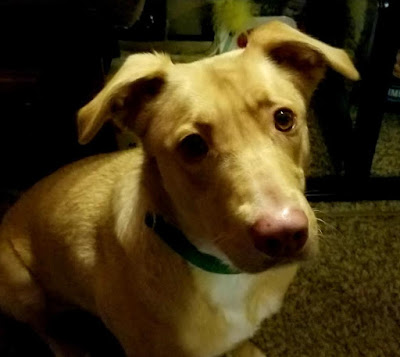 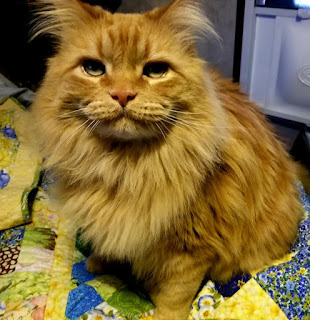 It was destined.
It was almost a year since I had assisted my Lab, Teak, into the next world. Her cancer had spread beyond comfort and dignity, while at the same time my soul sister Carole was dying of bile duct cancer ... my closest friend in life and my dog companion of twelve years exited my life within weeks of one another. Both were interwoven with my essence ... travels, writing, my movement across wild landscapes. I'd lost two tethers and my sense of who I was in a world, They were my co-pilots. Then, I broke my ankle, fibula and foot. I literally limped through it all. Carole's death overshadowed Teak's. I had never been so painfully positioned -- a physical, emotional and spiritual deluge. The brain fog of grief lifted enough for me to function through another season at Devils Tower WY and a shortened summer park ranger stint. Hobo and I waded through. He'd been grieving Teak for months. It took me until summer's end to work my way to the full force of her absence. Never so poignant as when I hooked up Jera and started down the road, my travel companion absent.

I began to consider another dog this winter.  I had always chosen a pup at eight weeks and raised her. A litter of fun-loving cockapoos was available down the road. I could use some fun and laughs; I put down a deposit. Over the next few weeks, however, I decided a little dog, albeit a cute companion, was not the best choice for my adventurous life. Think: coyote cookie. Most importantly, it was a huge revelation to feel that adventure would return to my life. I visited the animal shelter weekly seeking a medium-sized dog. I attempted to adopt twice but both times the dog went to someone ahead of me. I was disheartened. Careworn.

Then I saw her photo on a website. Her name was Neesy, short for nise. She was a short- haired, medium sized (55 pounds), lab mix. I clicked off the boxes of my preferred dog. She had been raised with a cat and was not an alpha personality. It was her story, however, that clinched it. The one and half year old dog had been rescued from her dying owner. Cancer prevailed within a few hours of the rescue.
De

The rescuer's dog did not take to Neesy. Several attempts to merge the dogs failed. Regretfully, they surrendered her to the Humane Society. She immediately contracted kennel cough. Within days she went from her owner's bedside to sick and quarantined; I couldn't visit. I called everyday and developed a relationship with one of her caretakers. Two weeks in, I received a call late the next day that she had been cleared by the vet and they would forego adoption for 90 minutes, providing me a window. It was rush hour. I made my fastest trip ever to north side Tucson.

I entered the building and was met by the staff person I had talked to many times. All went  smoothly. I departed into the night with a folder of paperwork and a confused dog spirit on the end of a new green leash. The little golden one was afraid to jump into the truck. I climbed into the seat and called to her. She obliged. I hugged her and assured her all would be well. She was silent and still for the ride home.

Three days, three weeks, three months. That's the formula for the adjustment of a dog into a new home. The first hurdle was Hobo. I had assured Hobo I would not bring an entity into our home that would not work for him. The newcomer displayed no bad habits. No chewing. Fully housebroken. No excessive barking.  And she respected Hobo's presence. Intent to bring out the best in her, I changed her name to Dulce. Dul-say ... Spanish for sweet. The unfolding proceeded. I was determined not to put perfect-Teak expectations onto Dulce. As much work as puppies were, I was glad to not start at the beginning, yet anxious that some hidden neuroses would surface in an older dog and ruin the effort. End in broken hearts. As much as I could muster, I put myself in Dulce's place. What did she hear in my wild world, knowing that dogs hear high pitches 100 X more, and softer sounds we can not detect. She loosed coyote warning barks at yips I didn't hear until I opened the door. How must my world smell to her, whose olfactory map is scattered with 10 to one million times the smells and stories detected by her wet nose? Love and treats led the way.

One week in, Dulce's remained painfully shy. She hid in the bedroom when a friend showed up and wouldn't show her face to anyone but me. But oooo, she loved the life. Walks on leash became off- leash adventures. She came when called. She blossomed. Three days, three weeks, three months. My mantra. 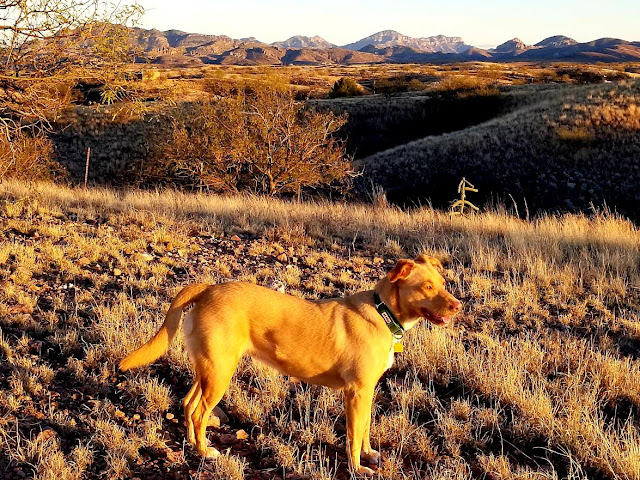 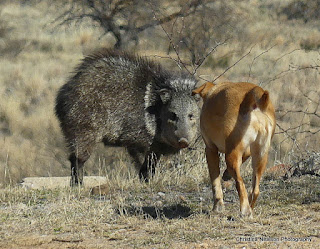 Week Two. I coaxed Dulce into VAN-essa (new van, another blog coming) and we headed for a public trail. She saw her first deer and watched with intent, no inclination to chase. This was followed by a trip to Arivaca Lake. Dulce approached the water gingerly and within minutes was standing up to her chest watching ducks and coots. Javelina encounters followed, as she and Hobo tagged teamed on announcing their arrival. 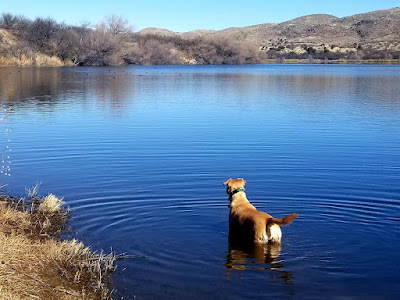 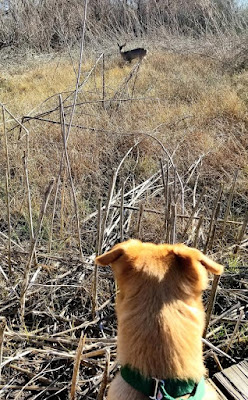 Dulce was doing well enough that I decided to visit daughter Hope in Tucson for a Super Bowl Party. Dulce and I would spend the night in the van, which would double as a protective place for her. We arrived to find two strange dogs, two cats and six people. She walked in like she owned the place, tail wagging and doggie happy. Since then she has met other strangers and dogs with no incident or shyness. Like magic.

A few days ago I took a couple of cheek swabs and sent Dulce's DNA into a lab. I'd done the same for Teak, suspecting she had something else in her genetics besides Lab, and she did: Russian Wolfhound three generations removed. I can't wait to see Dulce's results. Stats say that those who guess, including vets, are only correct 25% of the time. I polled facebook friends and have come up with a couple dozen purebred mix possibilities. What do YOU think?

Week three is coming up. Dulce's toy just squeaked and scared her. I don't think she had toys before. If she is a Lab mix the retriever gene didn't make the cut. Desert walks are a reminder to carry a comb so I can easily remove cholla cactus from her paws. For the first time since Teak's departure, Hobo is expanding his range, exploring outside, watching Dulce for clues and alarms. Like old times.

We are healing one another, and it is sweet. 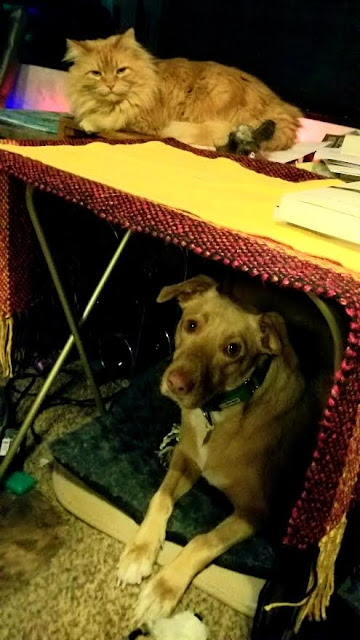 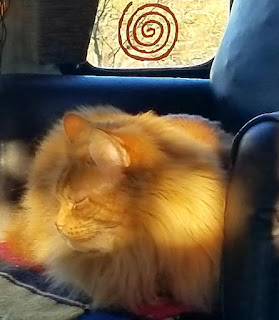 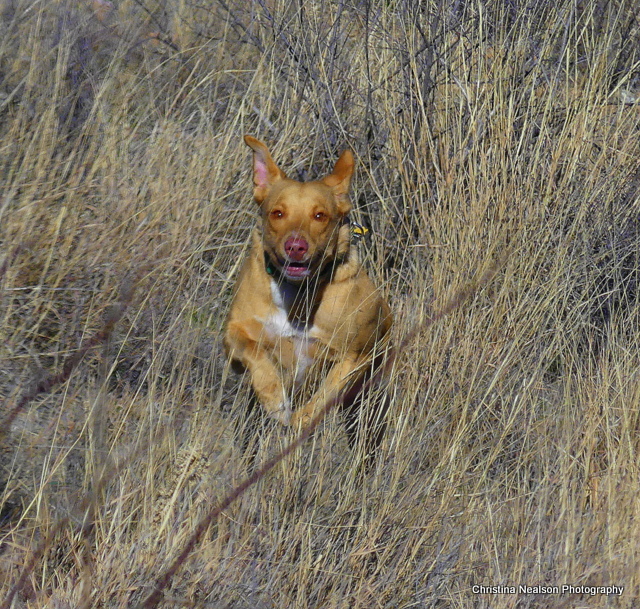 Posted by Christina Nealson at 10:54 AM