Up Against the WALL: Breathing Peace on the Borderlands 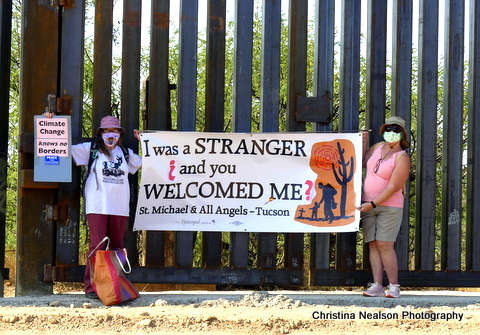 There were two dozen of us. We travelled the ribbon highways from Arivaca to Sasabe Arizona, swung a left onto dirt, raised dust for another four miles and found ourselves at the WALL. We were one piece of five, a week long multi-faith spiritual resistance to witness the construction of one of the most destructive, ill-conceived and ignorant US presidential acts: the construction of a border wall at a time when border crossings were at their lowest in years, and the major drug portals were proven to be the legal border crossings, not the migrants. Studies and facts are irrelevant to this ego-driven man. So it is, land is ripped open, sacred burial grounds are decimated, border towns and cities are divided, village water supplies are dried up and wildlife migration routes, intact for eons, are destroyed.  This week long action was our response: 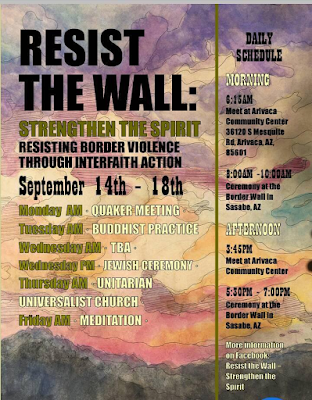 This was Buddhist day. I joined with others in meditation and service to contribute my energy to the greater good. In the spirit of my mentor Thich Nhat Hanh, I would seek connection and change through spiritual resistance. I was deeply thankful for the opportunity. 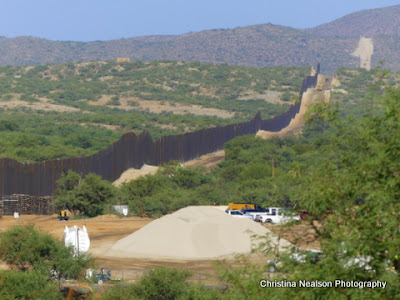 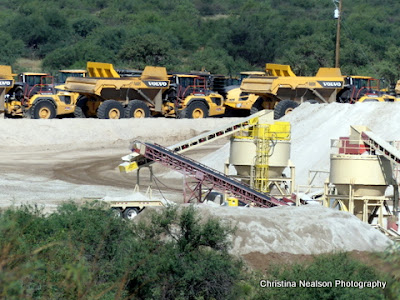 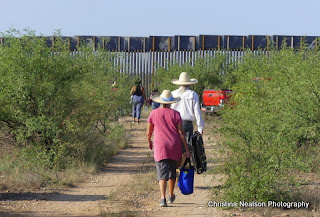 The WALL's metal slats loomed as we drew closer. Construction was ongoing. Wide gouges scarred the landscape to the east and west. Heaps of metal were stacked across the desert. Large machines moved up and down the hills. We arranged our chairs under shade tarps and with wall construction as the backdrop, we began our meditation. We were instructed to choose a focus that caused personal distress. The juxtaposition of peaceful intention and the WALL, with it's sounds, activity and repercussions, were overpowering. 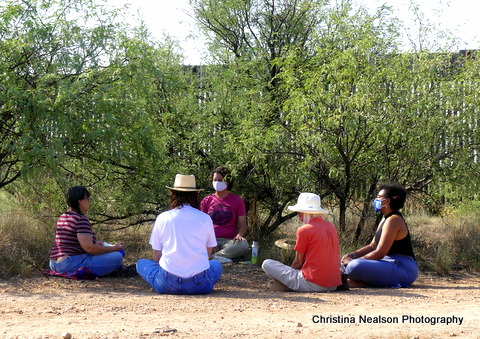 I relaxed into the meditation and was surprised when I landed upon an image of my estranged 98-year old mother who had recently fallen and broken her hip. She had severed communication with me nearly a decade earlier, after my father died, and we had settled into a distant quiet. Her fall had stirred the emotional pot. In addition to blessing the desert-dwelling beings such as tortoise and jaguar, I wished her wellness and recovery as I sat in the shadow of the wall, cocooned in meditative compassion. Then, holding this vision, I whispered, "Wounded Mother." This revelation overtook me as the wounds of mother earth were exposed in miles of vertical iron and men driving machines, blasting through mountains, doing the work of one crazed man with stolen funds. To the extent we humans are desperately out of balance we can follow the heart-torn paths to the wounds of Mothers. The birth givers. 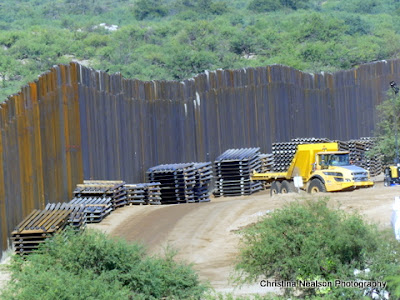 I had reached the point of peaceful indifference with my birth mother long ago. Her Karmic path is hers alone. Earth Mother, however, is another matter.  I will not sit by and allow our sustenance and existence on this planet be destroyed, day by day, by greed-driven men.

I wish the machine men would have stopped, jumped from the metal monsters and joined us. The man assigned to keep the wall secure began by telling us we could not approach and ended up protecting our right to do so.

Thich Nhat Hanh teaches that we are what we love as well as that which we resist and hate. Resistance and peace must come from this realization. Compassion, if only for a few moments, can permeate the battlefields, whether personal, family, community or global. In viewing the worst of what humanity builds I spawn an image of tearing down the WALL. That the decades-long murderous unrest the US has created in Mexico and Central America, causing people to flee on foot, walk thousands of miles and risk their lives in our deadly desert wilderness, will culminate in justice for all.

That all wounded Mothers will be healed. 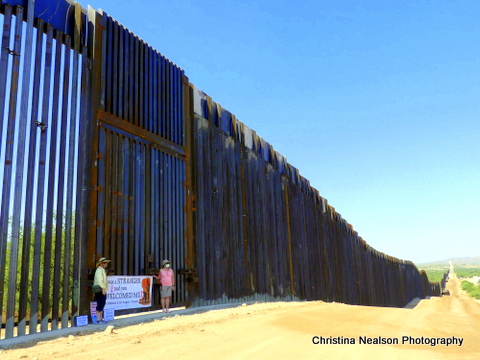 More Photos of the Day: 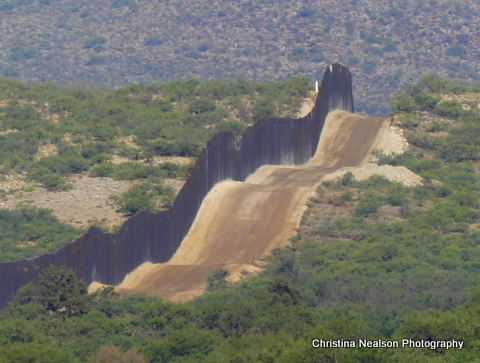 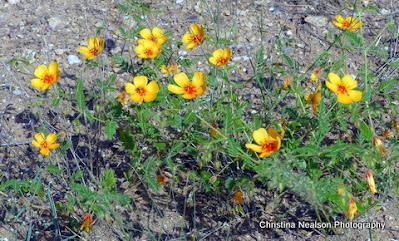 Posted by Christina Nealson at 4:38 PM