Kill on the Hill 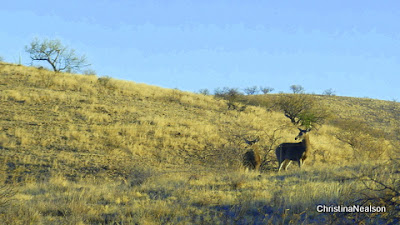 The soft transition from dawn to day was still in progress when Dulce's urgent bark propelled me from my chair. Barefoot on the frosty deck, I scanned hundreds of acres of tawny hills, a collage of sun and shadow against a cloudless sky. Dulce was insistent. I followed her stare to two anxious mule deer does twenty yards away, their eyes transfixed downslope. They took turns charging at a form I was yet to discern. They stomped and snorted their obvious upset. Within seconds two, three, then six coyotes appeared and circled. They backed off when charged but returned to a spot they would not give up. This dance went on for several minutes. 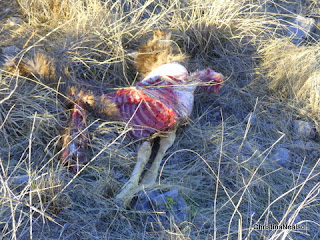 I grabbed my camera and headed toward the drama, choosing to leave my gun be. Dulce and I walked toward my northern fence line. The deer surrendered their positions and reluctantly trotted east as we closed in  The coyotes, now numbering a dozen, dispersed downhill into a ravine. I followed bloody grass and chunks of wiry deer hair to a half eaten carcass, the bright red ribcage protruding from pulled back skin. Thin, small-hoofed legs hinted at a yearling. The doe's coyote charge, although in vain, was the instinctual defense of her young. 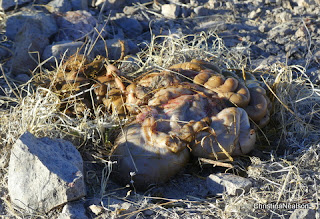 I stared, mesmerized, at the glossy red sinew as wary coyotes skulked around a wide perimeter. An ebony raven flapped low overhead and perched in the top of a mesquite. She would patiently wait, eyeing the venison spoils, the bones she'd pick and poke clean. Spring was anything but shy on this first day of March. A hefty rainbow pincushion cactus was aglow in pink; a small ocotillo cactus exploded in new leaves. To my left was a gut pile, so neat and defined it looked like a sculpture. I called Dulce to my side, lest she get a hankering to dive in and roll. 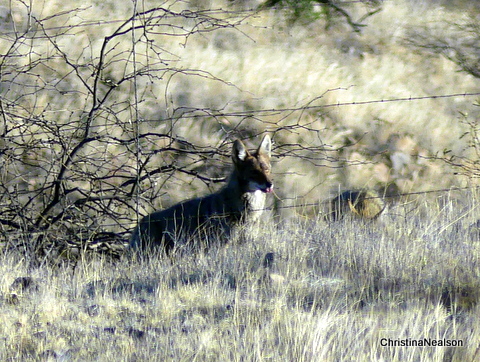 I have garnered myriad lessons from the wild through my seventy years. Foremost, that one can not escape the ephemeral nature of existence. The song dogs that fill the night air with exhilarating howls and yips will feast on beloved jackrabbits. The coyotes that slept curled protectively by the door of a recent visitor, night after night, will probably gnaw on this deer. 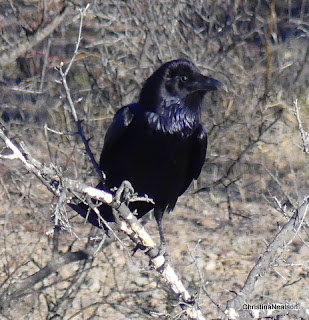 The sounds of the chase and takedown must have been a horrific intro to the mysterious unfolding. Were the coyotes latecomers to a lion kill? Were they the takedown artists or scavengers? It is known that ravens follow coyotes to find a kill. Vultures, who smell death a mile away, need no such queues, but they are yet to arrive, to scrape spring skies with their tippy soars.

The spirits are many on Querencia Hill. Most prevalent are deer, javelina, coyote, rattlesnake, cooper's and red-tailed hawks, finches, doves, sparrows and meadowlarks, zippy hummers and soft-spoken quail. Outspoken ravens and silent vultures rule the sky. Cottontails and jackrabbits scurry amongst rock. Packrats and mice join in clandestine deeds. When the large pond fills with monsoon water and game cameras are in place, I'm sure to confirm coatis and ring-tailed cats and mountain lion; perhaps even a jaguar visit. 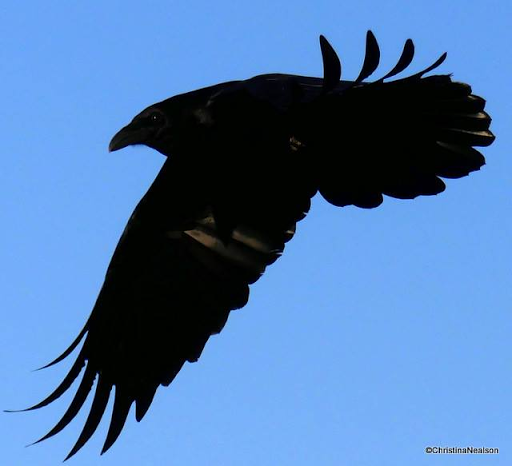 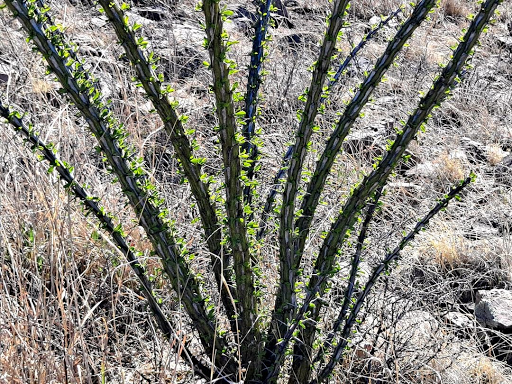 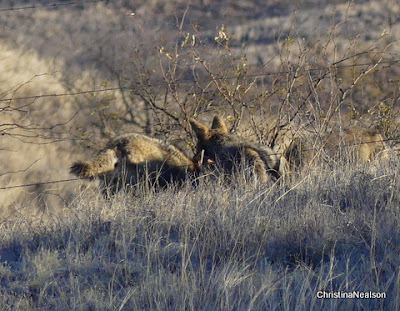 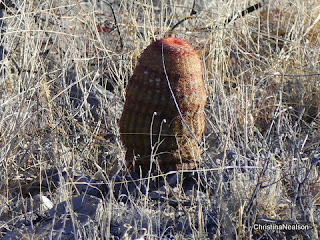 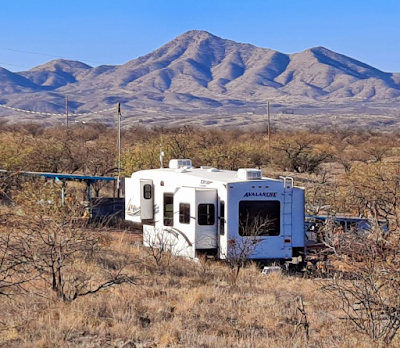 Querencia: Spanish word for that safe place where one can be her/his authentic self.

Posted by Christina Nealson at 6:53 AM