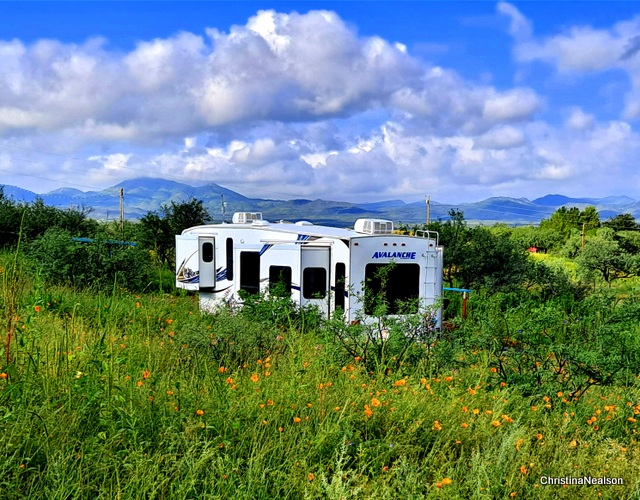 A dream directed me here. Serengeti landscape kept me here.

I was preparing to depart Washington State when a dream awakened me with a snapshot image of an unfamiliar crag jutting into the air. The image returned in two more dreams, tickled my subconscious as I drove southeast, Arizona-bound. I had just gassed up in Tucson, headed to Patagonia for the winter, or so I thought. I was breezing down I-19 when that rock appeared out my driver's side window. Not one to ignore omens, I took the next exit and turned onto Arivaca Road. It only went in one direction: west. A ribbon of highway weaved over hilltops, around curves and into dips across dry arroyos, following the contours of the Sonoran desert hills. Long grasses and mesquite thorn bush reached in every direction. It was as Serengeti-like as possible, short of returning to the African plains. I pulled the truck and trailer to the side of the road, jumped out and stretched into the expanse. My eyes scanned the hills, half expecting a lanky giraffe to lope over the hills.

I am on my seventh year in Arivaca-land. Five of that was half year, wintertime stints whereupon I  headed north for Park Ranger seasonal positions. The past year and a half, since covid, I have remained year around on the ten acres I call Querencia Hill. Querencia, Spanish for safe place; a place where one can be their authentic self. Authentic self? -- my first instruction to visitors is to pee anywhere, the desert needs it. This place continues to parallel Africa. Pronghorn, closely related to giraffes given their leg structure, grace the Buenos Aires Refuge hillsides. There is a rainy season called the monsoons, and like the Serengeti, it explodes the tawny landscape into green. Waterholes fill, including my very large, horseshoe-shaped pond. The unusual abounds. Roseate Spoonbills were recently spotted at Aguirre Lake. No hippos have taken up residence in my pond, but it is possible a jaguar could drink from water's edge. 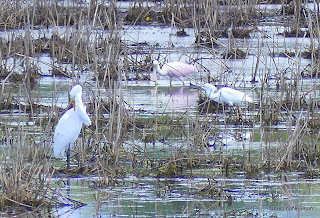 And then, there's these ... the crazy, head-turning, miracle worker beetles rolling ... shit. 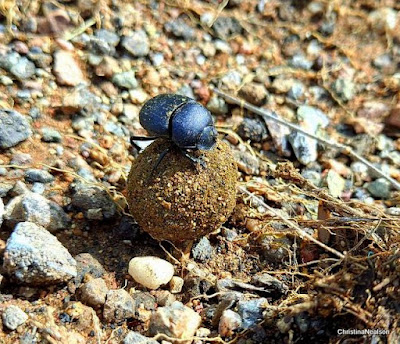 How DO they do it? Look at that perfect ball!

I'd seen these dung-rollers in Tanzania and Zimbabwe. I honestly didn't pay much attention while in the company of elephants, cheetahs, klipspringers, zebra, wildebeest, ostrich, well you get the idea. But when recently riding my e-bike across the Sonoran hills I spotted a ball of cow poop rolling across the asphalt road. I braked and turned around. Could it BE?

So, why DID the dung beetle cross the road? And, how? I was shocked to see that they direct their ball with their rear legs, standing on their front ones. I thought they worked with gravity because they were using the curve in the road in their favor, but then I witnessed one reach the opposite side of the road, only to hit the white line and nope. He didn't like it. He changed direction and headed up hill. Another had no problem with the white line, rolled his ball across and onto the ground. 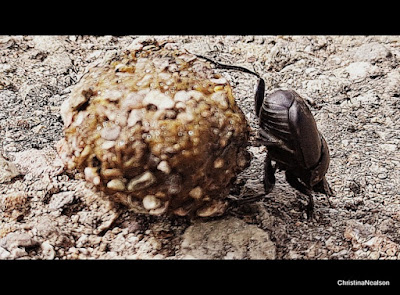 As to why? These beetles use their ball of dung to nest, feed and raise their young. The "roller" is the world's strongest insect, observed pushing 1,141 times its own bodyweight. That's equivalent to "an average human hauling six double decker buses full of people." Their journey is fraught with risks. Besides being squished, the male roller may come under attack by another male to steal his ball. (Dung ball theory of history, anyone?) Once he gets rolling, a female joins him, crawls upon the ball and rides along. Remarkably, the dung beetle uses the Milky Way to orient and find his way.

To witness a dung beetle is to see a being who has been around for eons. They wrangled dinosaur dung (their remains found in coprolites, fossilized dinosaur dung) and images of the Scarab beetle are found throughout Egyptian iconography. They believed the Scarab's ball of dung a representation of the sun traveling through the sky, carrying new life.

The chubascos are full on. Rains began late June and continue. It is not the normal spotty storms laced with scenic lightning and rolling thunder. This year the storms are angry. Thunder rocks the land, lightning bolts blast the hilltops. Thankfully, I have received fifteen inches of rain on Querencia Hill. The pond is full. Spadefoot toads sing the night awake. 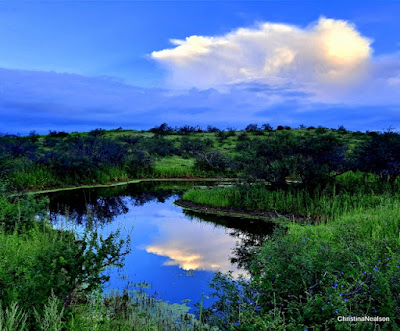 In between the squalls a small beetle pushes a large, round ball of waste across a road. Guided by the Milky Way, his ball guarantees the next generation. Or as the Egyptians believed, the genesis of new life. I inhale the wildness of these hills; ferret out the metaphors. It is a potent realization that a small beetle has evolved for eons as thousands of butterflies flutter through the lush green grasslands. The covid Delta variant spreads like fire across the globe, and here I am, in the dizzying cosmos, under the brightest Milky Way I have ever seen. I ponder excrement and birth, my journey to this Serengeti land led by a dream of an elephant head, and the necessity to roll shit through rocky terrain into verdant hope-filled fields. 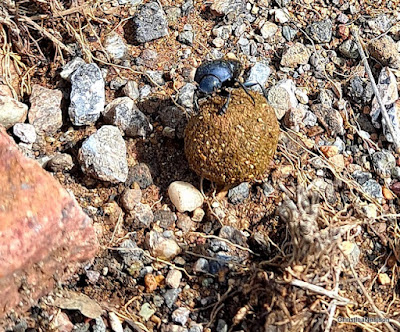 Posted by Christina Nealson at 6:39 AM