I was a three-week runaway in Silver City. I had vowed to not spend another June on the Sonoran Desert, the hottest month of the year, and a friend's New Mexico house was available. The plan was to exit for a month, but a root canal gouged away one week. Rooted out, I headed down the road, despite a newly-discovered (thank you, Hope) oil puddle under VAN-essa. Nope, no more delays, I'd chance it. It was my first lengthy trip since the pandemic had enforced it's multi-level imprisonment. Silver City was the perfect choice: a few hours away, 6000 ft altitude, and with gas prices nudging $5.00 a gallon, an affordable distance. So it was I departed, leaving behind Noam Chomsky, who was courting a new raven gal I'd named Rosa (Luxemburg), myriad songbirds and hummers, and a chest freezer I hoped would not fall victim to an electric outage.  As for the oil leak, I scurried into a mechanic upon arrival in Silver City, who quickly determined that iffy lube had not tightened the filter.

Three weeks does a lifetime make. At least in this case. The vibration lifted as I checked out the live music scene and danced public for the first time since covid. I frequented a favorite secondhand bookstore and met an old friend at Faywood Hot Springs for a camping overnight. Hope visited for several nights and we drove through monsoon downpours to places like the Glenwood Catwalk and made our way to Palomas, MX to the Pink Store and a visit to my favorite dentist ($40 for check-up and clean; $40 for a filling). I filled quiet time reading Willa Cather, DH Lawrence, Joy Harjo and a revisit to Leopold's Sand County Almanac. I wrote again. Let me repeat: I wrote again. On the final day I journeyed solo into the Gila Wilderness to the sandy-divine hot springs; soaked under the pine-scented forest canopy. The first pool I dipped into brimmed with chatty, partying women from Silver. It was a great networking opportunity and fun for a bit but not what I needed on this day. Seeking solace, I moved to a smaller, quiet pool with one person who appeared to be leaving. Hot springs magic prevailed. Short words of introduction led us to discover we had travelled similar places at similar times. He was an uber-interesting man who happened to be a fabulous birder. Alas, he was headed to Montana and I was headed to Arizona. 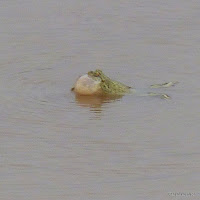 Hillsides transformed from brown to green. As I uncovered the firepit  a hand-sized tarantula fell from the tarp and ambled away.  Quail calls filtered through grass and mesquite as hatchlings, resembling zippy walnuts on legs, scurried between two parents. Thorny, short branches waved in the breeze from a portale rafter, signs that Curve-billed Thrashers had staked a prickly claim and taken up residence. In a few short weeks I had progressed from previous months of hijack to witness a physical, olfactory, visual, tactile takeover. I was ecstatic.

Enter Noam, to seal the deal. He arrived, strutting his hello. A few steps in, his Rosa arrived. Oooo my. He wasn't too old to take a new mate after all. I watched as they allopreened, a caressing ritual for bonded pairs. And then I witnessed something amazing. As they nuzzled back and forth, her second eyelid, a white nictitating membrane, lowered over her eye, a sign of affection and trust. I had seen Emma do this when she communicated with me, in a different context. Their presence initiated a healing inside of me as grief dissipated. Yes. Noam took the lead. 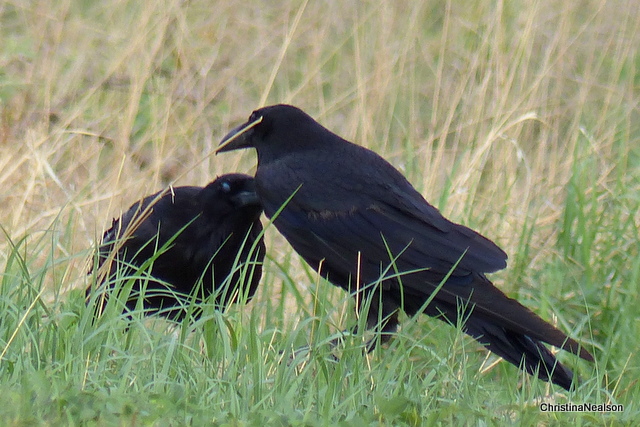 And then, sweet surprise! SQUAWK. Squawk. So much for intimate moments as two raucous fledglings arrived. Wings flapping, beaks ajar they demanded to be fed. The unit had gone from 2 to 4, as they took over the airspace with cheeky antics and awkward landings. 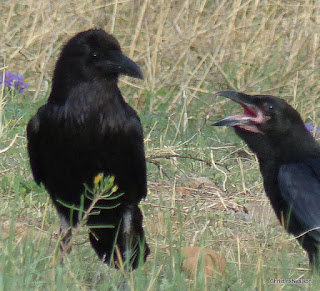 It was hilarious to watch these large birds act like the babies they were! Except for mouth color, ravens look the same as adults at one month. They are full size in forty days. I differentiated them by their squawks, nervous hops, begging, leaner bodies and higher pitched calls. It was a new flood of energy. I was excited to witness and study this raven family.

What takeovers have in common is the element of surprise. My favorite viewing platform is the deck outside my door. From this perch I have an unobstructed view for 75 miles to Baboquivari Peak and oversee my bird feeding station a few feet away. I'd heard a strange bird call in the mesquites, near the pond, since my return. Friend Judith and I were enjoying the raven show from the deck when she interrupted and proclaimed, That's a cuckoo! A Yellow-billed Cuckoo call. I'd been searching for this bird for years and there she was, on the land. I now hear her several times a day, when not drowned out by the rowdy ravens. I have seen the shy one once.

Yes, it is good to be home, ensconced in the wild richness of Querencia Hill.

A lasting peace, I pray.

Posted by Christina Nealson at 6:34 AM