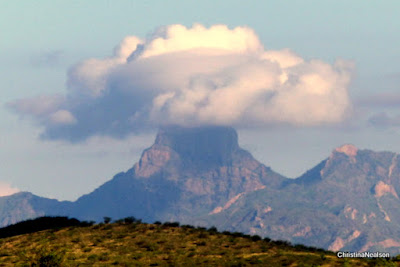 I awakened to an automatically generated email, telling me the power was out in my area. I checked with friends and discovered it's an outage of one. Me. A neighbor suggested I go to the main pole and flip the master switch. Good idea! I headed outside. Noam and Rosa were in alarm mode, screeching and squawking and flying low overhead. I squinted as I neared the pole, something dark was on the line next to the transformer. Oh no. My heart raced. It was a fledgling raven, hanging by her feet from the electric line. A switch flipped, alright, but not the intended one. I was gobsmacked, wavering between a monumental attempt to stay centered and Hope's voice on the phone: Not again! Mom you gotta get out of there. This is a sign! 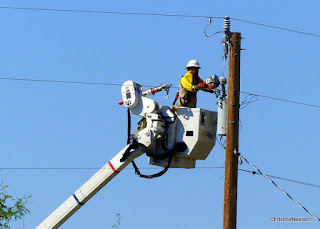 It was around 6:00 a.m.  I called the electric company off-hours dispatch. I figured they would want to know there was a dead raven on the line. I live 90 minutes from their north Tucson office. A longer drive during rush hour. Danged if their truck didn't come up the gravel hill by 8:00. I was impressed. I made my way to the truck as the worker extended a flexible pole, reached up to the highwire and pulled down the young one. We see this often, he said. The babies peck and peck on the protective caps until they get it off. The raven had already disappeared. I asked if I could have the body but the man named Amos said he had to take the body. It is sent to the university for research and an autopsy; they want to determine if it is a Chihuahuan Raven. I told him it was. Amos showed me the replacement piece and the cap. It took him a few more minutes to get the cherrypicker up there and replace it. I had power well before the 10:00 marker when my AC kicked on to save me from the triple digit desert heat.

The shock of the sudden death faded as Amos shared animal rescue stories. My favorite was his account of chainsawing an old powerpole. He had loaded it onto a flatbed truck and thought he was finished when a Western Screech Owl poked her tiny head out of a hole. Uh-Oh! He offloaded the pole and chainsawed the upper portion of the pole that contained the nest as the owl watched curiously from her hole. He then attached the owl home to the top of another pole, all the while, she watched with approving eyes.

Noam, Rosa and the remaining ravenita had quieted down. By the time Amos departed the three of them were perched in the Grief Tree, the mesquite snag on Baboquivari Ridge where Noam had spent weeks after Emma's death. This time was different, however. Life must go on, as he and Rosa cared for the fledgling. They had begun to separate from them prior to the death, and that continued. Rosa spent time with the baby as Noam perched silently.

Ravenita, who I now affectionately call Amos, showed up more and more alone. She sat in a nearby mesquite and carried on conversations with herself, reminiscent of a parrot, a variety of caws, mews, notes, chortles. I watched her wings stretch as she struggled to keep balance on top of fenceposts; I laughed at her awkward wingtilts in flight. When she showed up with Noam and Rosa, Noam hopped over her, as if to ignore. The separation process heartwarming and fascinating.

It is August first, the cusp of Lammas, the olden celebration of first harvest and abundance. At 71 years, I am well aware of the downside of abundance, as well as the upside. The downside has been predominant since covid. The loss of Emma and Hobo have left me raw. Hobo's departure was the final vestige of my 19-years on the road. The fledgling's body, hanging from the wire, relit the memories and pain. An abundance of grief, yes. Sometimes I wish I could fly to that snag and perch beside Noam. We all need a grief tree, do we not?

Yet, the upsides of abundance surround me. The lush monsoons have gifted the desert wildscape with eleven inches of rain this summer. The pond is full beyond old markers, frog and toad songs fill the night air. The weedeater is close to becoming a permanent appendage. I stand in the rain and ask deeper questions. I am a woman accustomed to large changes. Deep novelty. There are longings not fulfilled at this time of my life. Where will these stirrings deliver me? A few days ago I removed all jewelry. Some I have worn daily for decades. I want to confirm that the energy held therein serves me at this delicate time. That it propels my soul down her karmic path, not tether me to old roads and hidden ruts. Thus far, the only piece I have returned to my body is the gold and garnet ring I gifted myself years ago, when I completed my graduate degree, a symbol of Christina against all odds. And yes, I see myself re-clasping the wild woman pendant around my neck, purchased on Berkeley's Telegraph Ave. from a street artist so very long ago. I pause before the silver Vidal Aragon bracelet, gift from a past husband and certain pairs of earrings. Everything is energy, and the energy of jewelry is profound.

Soulwork is complicated. Purpose is clouded by eco-crisis. The great unraveling. A world drenched in extinction. And yet here we are, born into this time. How to  find our way? Bertolt Brecht: In the dark times/ Will there also be singing?/ Yes, there will be singing./ About the dark times.

Noam, Rosa and Amos visit daily. They circle Querencia Hill and call hellos. They land on mesquites and perch atop my powerpole. They eschew, however, the main pole and wire where the young one died, once their favorite gathering place. On this August day, the danger that lurks is abundantly clear.  Clouds lift. I keep the grief tree in view.  Sing to her.

Posted by Christina Nealson at 5:45 AM