How Hobo 'n Me Came to Be 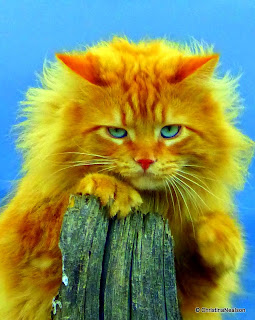 I’d zipped along the British Columbia highway for a good hour before I pulled over to peruse old gravestones. I slowed the truck as a sharp squeal emanated from underneath. A kick at the tires and a walk-around garnered no clues. The next time I braked it happened again. Was it the bearings? Nervous, I decided to turn around, but not before I bit on a yard sale sign. I pulled in front and was walking towards the goodies when it happened again. I stopped dead in my tracks. Nope, not the truck.

I scooted underneath the pickup on my back and there, huddled into a space on the frame of the truck, was a teensy golden kitten. Unbelievable survivor.  Hey Sweetie, I coaxed. I reached and she leapt. Took off running through the woods, stopped briefly at a stream where she lapped feverishly before she jumped in and swam away against the current. This was not just any cat.

I returned to the sale and paid Sandra for a rug. When I explained the kitten’s escape she said it wouldn't last the night in the critter-packed backwoods. Then I made a move that defied all common sense. I took out a business card and handed it to her. If she shows up again, please call me. 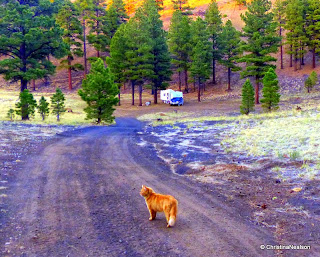 A cat, Christina?  Are you out of your mind? A seasoned author and photographer, I’d sold the house and been on the RV-road for seven years. Teak my Lab and I were doing just fine. But I’d also learned to pay attention and trust signs; this little scrambler was a huge bit of magic.

I awoke with a dream of the kitten around midnight. My phone range at 7:00 a.m.

The kitten is here … showed up meowing beneath our bedroom window at midnight.

I smiled and returned to the edge of the forest.

The long-haired hitchhiker was around four weeks old. She had made herself at home on the garage couch; cast me a what-took-you-so-long look as I picked her up and whoops! -- felt two little boy knobs beneath the tail. His eyes were matted with yellow gunk, his sinuses were congested, he sneezed and his marmalade coat was scruffy as heck. The last thing I needed in my adventure travel life was a feline. True that. Too late. 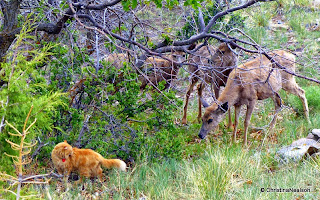 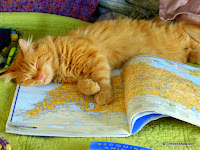 I named him Hobo. He joined the ranks of the undocumented when we crossed the Canadian border. Since then he has hitched the back roads of every western state with Teak and me, staring down deer and escaping coyotes. He draws a crowd and photobombs magazine covers; plops himself down in landscapes, lets loose with a gaze and nails your soul. With aplomb.

Hobo says this story balderdash. He had this all planned out. His Highness watched me from afar before he methodically climbed into that dark greasy spot underneath the truck and clung for dear life at seventy miles per hour. But that’s a tale for another day. 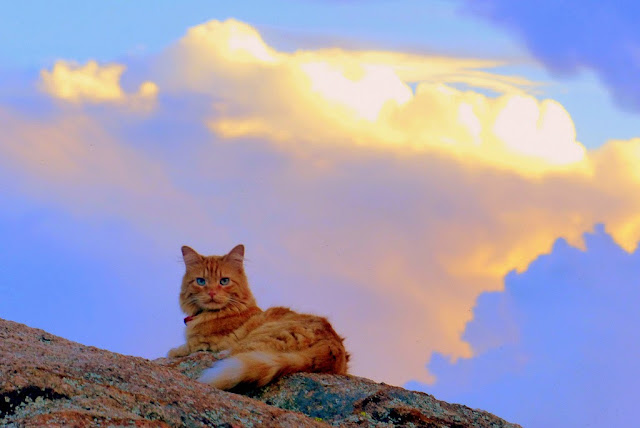 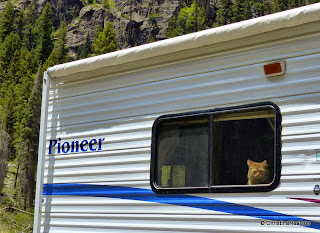 Posted by Christina Nealson at 12:02 PM